A 2 Player Tabletop Roleplaying Game about Relationships Reforged in Conflict.

In an ever shifting war that has spread to the entire Merseus System, the Roran Federation's Ace Pilot has barely escaped from their life from a recent incident. Sadly, there is no time to rest for the pilot or their mechanic. This Mech needs to be ready to fight tomorrow and no one else is available to help. It’s going to be a long night.

Play out the history of your relationships in a series of flashbacks, both the lows and the highs. How will you both feel about each other once this Mech is finally repaired?

Created for the Emotional Mech Jam hosted by @takuma_okada_ and @cartwheel

If you received this game from the Emotional Mech Jam Charity bundle and would like an updated version, please feel free to send me an email.

In order to download this Tabletop RPG you must purchase it at or above the minimum price of $5 USD. You will get access to the following files:

Support this Tabletop RPG at or above a special price point to receive something exclusive.

If you can't afford this game and you would like to read/play it, please redeem one of these community copies. More will be added as more people purchase this game.

We played this on Hope's Hearth and I cannot stop accidentally calling it "Long Night In The Mech Gay". I called it that once and then that became one of the episode titles and now every time I say the game name I accidentally say that lmao

It's a good game, and if you want to tell a bittersweet story about two people alone with their thoughts, their pasts, and what could have been, HIGHLY recommend this game. 10/10

I thought this game was beautiful! Deeply enjoyed using it paired with a few others. I went to follow you on Twitter to message you about getting the updated file and I’m blocked… </3

this is game i wish i wrote, and i mean that as a high compliment--what an absolutely beautiful game. simple, powerful, and smart in its construction. what a good 2-player game. what a good story my friend and i told, because of this game. thank you for making this.

This is an absolutely beautiful game for two players - extremely well-designed with great prompts that give you just enough of a starting point to get going. The flow of the game feels very cathartic, as it moves from the first stage of "scars" - bringing up negative memories in which your characters have hurt each other, as you also describe how the mech is broken - to the second stage of making repairs, in which your characters recall positive memories as they try to mend their relationship or atone for past injuries while fixing the mech at the same time. The final stage as your characters say goodbye to each other before the big fight is full of bittersweetness, hope and dread warring in your minds. It's a game that made me really emotional and within the span of a couple of hours built a relationship I was deeply invested in. I'm so in love with it!

Two-player trpgs are a weird beast. At their best, there's a kind of tension to them that's hard to describe---and Long Night is definitely two-player rpgs at their best.

Long Night is a structured conversation, with a few prompts and rules to hem it in. The whole thing is centered around a moment of tense calm in the middle of a geopolitical mech saga, and while the players are on the same side, there's *exactly* the kind of built-up animosity between them that you'd expect.

Long Night does a good job with creating and structuring this mood, and mood is 100% of the story that you're telling here, but there were a few places where a specific prompt or term felt just goofy enough that it snapped me out of immersion. "Zebulon-6" for example, or the Mechanic and Pilot's really, really generic callsigns and nicknames had that effect, although they may be less jarring if you play a slightly goofier version of the game, or if you can do 1970s mech drama with a straight face.

There's also a little bit of weirdness with the way the fiction and the rules flow, as the game calls for a repair montage after the two fairly intense dialogues that make up the first 60% of the game, and the dialogues feel like they'd be more natural intercut with the mech repairs.

Finally, the last part of the game goes a bit heavy on making it a romance, whereas the rest of the game is completely okay with it being a story about a heavily tested friendship, and this shift in tone felt like it removed some of the nuance of the situation. I think my inclination here would be to make the game's questions just recommendations, and let the players ask their own questions instead of/in addition to.

Overall, if you've got a friend who likes messy and emotional complexity and fighting robots, I think this has the potential to be an intense, super memorable experience.

For folks who want crunch, or a silly/comedic tone, or I guess a giant campaign or something, it maybe best to wait on this one and possibly check out one of the game's inspirations, Mobile Frame Zero, in the meantime.

I suspect Long Night would also make an excellent performance game (it's even structured like a three-act play,) and I would absolutely recommend anyone doing an actual play podcast to check it out for that reason.

-Game page, "has barely escaped from their life from a recent incident", first from should be a 'with'

-Page 4, under Questions, "ours gazes" 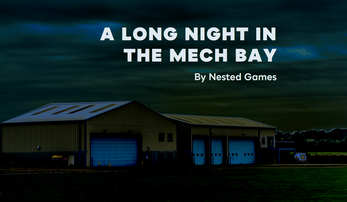